On Saturday, December 8, 2018 at approximately 2:20 am, Patrolman Brian Goetz was on patrol when he observed flames coming from a second-floor window of a multi-unit house. Patrolman Goetz reported the structure fire to Dispatch, who in turn notified Fire Personnel and dispatched all available police personnel to the scene.
Patrolman Goetz calmly assessed the situation and disregarded his own safety and entered the burning apartment building and began
evacuating the tenants. Many occupants were asleep and not aware that their home was on fire. Due to the frigid weather conditions as he was evacuating the building, he directed the displaced tenants to his cruiser.
Sgt, Sprague, Officer Coai, Officer Land and Officer Williams assisted at the scene but it was Officer Goetz’s quick actions which far exceeded his duties and by disregarding his own safety by entering the massive, smoke-filled dwelling with no specialized equipment,
saved the lives of those located within.
Because of these actions the New England Association of Chiefs of Police Department wished to acknowledge the selfless act of Officer
Brian Goetz by presenting him a medal of valor. 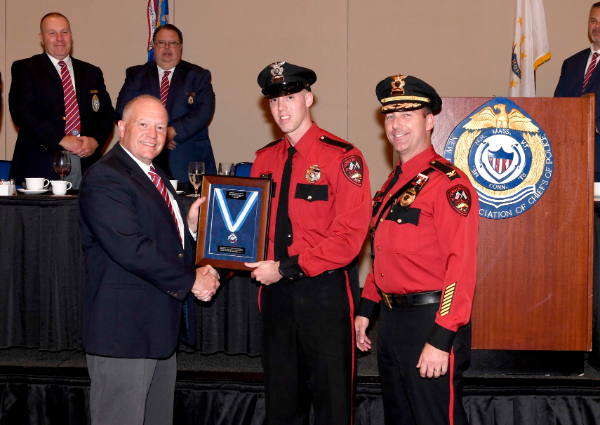 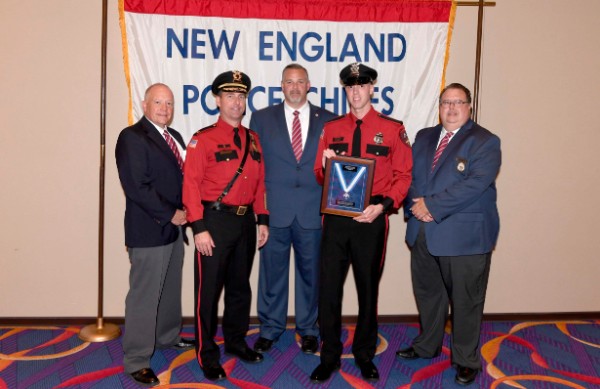 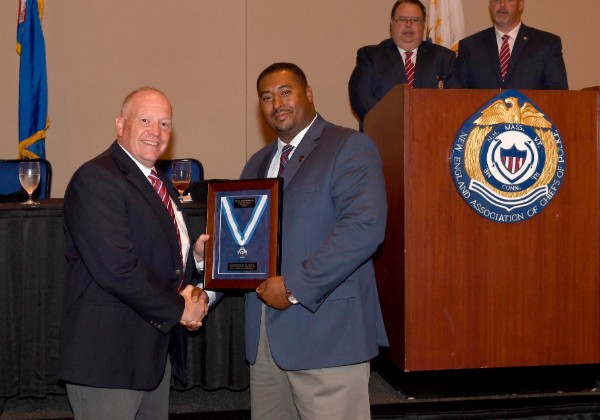 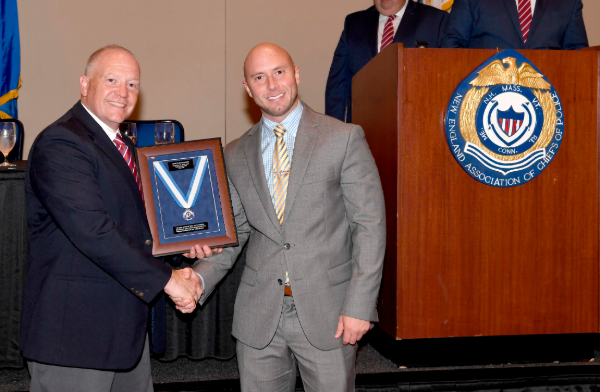 On July 27, 2018 Officers from the Falmouth Police Department responded to a neighborhood in East Falmouth for a report of a male subject breaking bottles in the roadway. Officer Donald Demiranda and Officer Ryan Moore arrived and spoke with the subject who continued to act in a disorderly manner. When the Officers attempted to take the subject into custody, he broke away and ran into his home. The Officers pursued the subject into the home where they were met with gunfire from a .40 cal semi-auto pistol. Officer Demiranda was shot at close range in the shoulder and twice in the torso. Fortunately, his ballistic vest absorbed the rounds to his torso. Officer Moore was shot in the head as he entered the front door while fighting off two relatives of the subject. Officer Demiranda returned fire striking the suspect several times.
The suspect attempted to flee but was apprehended on the front lawn where he was cuffed by Officer Demiranda. The Officers then radioed the dispatch calmly reporting they and the suspect had been shot and were requesting back-up and rescue while still maintaining cover on the home, securing the suspect’s weapon and then rendering first aid to the suspect until advanced life support and back-
up arrived.
Officer Demiranda was transported to the local hospital and was eventually transferred to a Boston hospital for surgery on his shoulder. Officer Moore was treated at the local hospital for the gunshot wound to the back of his head (graze). The suspect was flown by medical helicopter to Boston for treatment of his gunshot wounds.
If not for the protection from his ballistic vest, Officer Demiranda would, most undoubtedly, have received more serious physical trauma or worse. The Falmouth Police Department relayed they couldn’t be more proud of the bravery and professionalism exhibited by the Officers during a very stressful and dangerous encounter with an armed assailant.
The New England Association of Chiefs of Police Department wished to acknowledge the selfless acts of Officer Donald Dimiranda and Officer Ryan Moore by presenting each of them with a medal of valor.