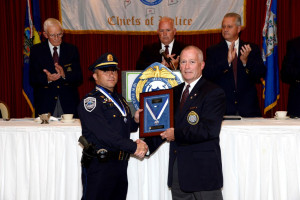 Policy: It is the policy of the New England Association of Chiefs of Police (NEACOP) to recognize a police officer each year that voluntarily distinguishes himself or herself by extraordinary heroism. The officer must be fully aware  of the imminent threat to his or her personal safety and must have acted above and beyond the call of duty  at the risk of his or her own life or well-being. Some nominations may be for more than one officer as a result  of nominees being involved in a single incident. Such nominations should be judged as a single nomination.  The award may be made posthumously

Nomination Format: Nominations for this award shall be made by the Chief of Police or Senior Law Enforcement Officer of the nominating agency. While an official NEACOP Award Nomination Form must accompany each nomination, there is no specified format required for nominations. However, it is suggested that the nominations include a statement of the specific circumstances and facts of the incident(s) underlying the nomination, which may be supplemented by supporting documents, such as departmental citations, letter of commendation, newspaper clippings, etc. No videotapes will be considered. If possible, a black and white photograph of the nominated officer should accompany the nomination.

Method and Timing of Delivery of Nominations: Nominations must be delivered by mail or courier to the NEACOP Heroic Awards Committee Chairman – Chief Mark E. Leonard no later than May 1st, 2022 (or the closest regular business day thereafter). Only acts of heroism that occurred between August 1, 2020 and July 31, 2021 shall be considered. Please complete the form below and ensure that all sections are completed and the form is attached to the supporting documents and materials. Please submit by May 1, 2022.

Presentation of the Award: The award shall be presented to the winner at the NEACOP Annual Conference.